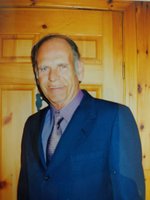 Thomas “Tom” Richard Goodwin, 79, life-long resident of Kingsport, passed away peacefully on September 16, 2020 in Evergreen Home for Special Care with his family by his side.  He was the son of the late Leroy and Pearl (Crowell) Goodwin.

Thomas was a loving father, grandfather and husband and will be deeply missed by his family and friends

Tom was a commercial fisherman most of his life. In his early years, fishing groundfish and in his later years, a lobster fisherman.  In Tom’s semi-retirement, he turned to outboard motor sales and repair which he continued until he had to go to the extra care home.  Tom believed anything could be done with hard work and determination, the word “can’t” did not exist for him. One of his proudest days came in 1981 when his launched “The Fundy Pearl”, his 45-ft fishing boat.  He built this vessel all on his own and named it for his beloved mother.

He was proud of his work with the Kingsport Community Association, getting the boat launch approved and built, and he had pride in his work getting the Community Centre open and both are enjoyed today by many.  He always said there was no better place to live, than in Kingsport.

“Dad got his love of the ocean from his father and then passed it on to me.”

Besides his parents, Thomas was predeceased by brothers Ronald and Vernon.

Cremation has taken place. No funeral as per Tom’s wishes. Memorial donations may be made to the Kingsport Community Association or the Heart and Stroke Foundation. Arrangements have been entrusted to Serenity Funeral Home, 34 Coldbrook Village Park Dr., Coldbrook, NS, B4P 1B9 (902-679-2822).