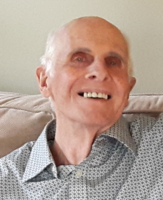 It is with great sadness that the family of James “Jim” Lyons Longmire, 91, of Bedford, announces his passing. Jim passed away peacefully on June 15, 2021, in the Palliative Care Unit (many thanks to the staff in 7A) at the Victoria General Hospital in Halifax. I cannot say how much Veteran's Affairs Canada helped Dad during the last five years of his life. Without their support, Jim could not have stayed home as long as he did, had as much care, or received all of the medical assistance he received. The VA was always there for us. Also thank you to the caring staff at Comfort Keepers who helped take care of Jim at home. Jim is survived by two daughters, Lise Longmire and Gina (Longmire) Bowen, and two grandsons, Matthew and Lindsay Duggan.

Born in Middleton on May 7, 1930, Jim was the only child of Norma (Lyons) and Charles Longmire. He lived in Bridgetown until the age of 8, and then moved to Waterville, to the Lyons’ home (aka St. Elmo). Jim attended school in Waterville.

At age 17, Jim joined the Royal Canadian Air Force, serving as a Corporal as a Radio Technician for ten years, at various postings throughout Europe and Canada until 1958. Jim then began working at CBC Radio in Halifax before transitioning to CBC Television, where he worked as a Coordinator Producer and Video Technician for 35 years before retiring. Jim was predeceased by his loving wife of 56 years, Janice (Pinch) Longmire.

Jim was a devoted son, husband, father and grandfather.

Jim worked hard, was always very generous with his time, and willing to lend a helping hand, especially to fix anything that needed fixing.

Jim was a voracious reader and had many interests, especially relating to history, news and world politics. He was an avid outdoorsman who enjoyed fishing, hunting and tending his vegetable garden. He could build, fix, create, do just about anything regarding cars, construction, electronics, plumbing, just to name a few. Jim also loved a good joke, had a great sense of humour, and was an entertaining and engaging conversationalist.

We have many fond memories of time spent just hanging out with family and friends, laughing and talking at the dinner table, digging clams, playing cards, or watching football." Jim (Dad, Pappy), you will be missed.

A private interment will take place in Berwick at a later date. In lieu of flowers, memorial donations may be made to the Canadian Cancer Society.  Arrangements have been entrusted to Serenity Funeral Home, 34 Coldbrook Village Park Dr., Coldbrook, NS, B4R 1B9 (902-679-2822).