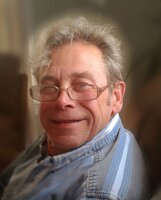 It is with great sadness the family announce the passing of Roger Thomas McCullough, 69 of Digby, on October 29, 2022 in the Digby General Hospital. Born July 27, 1953, he was the son of late Russell and Mimi (Gidney) McCullough.

At an age that Roger could begin work, he enlisted in the Navy moving to Victoria, BC. Once his time there was completed, he trained as a Mill Wright and worked in Alberta for a while. Later in Roger’s life, he obtained his air brake license and drove an eighteen-wheeler after moving back to Nova Scotia.

In addition to his parents, Roger was predeceased by a son in infancy and niece Deneane Stewart.

Cremation has taken place and a Graveside Service will be held at a later date. Memorial donations may be made to the Heart & Stroke Foundation.  Arrangements have been entrusted to Serenity Funeral Home, Digby County Funeral Chapel, 367 Highway #303, Digby, NS B0V 1A0 (902-245-2444).