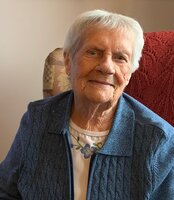 It is with heavy hearts that we announce the passing of our mother, Jean Marie Carr (Galbraith), in her 89th year on November 1st, 2022 at Northwood Manor in Halifax. She was the daughter of the late Harry and Mary (Harrington) Galbraith. Born in Halifax, Jean was the last remaining member of her family; predeceased by brothers, Bill, Doug, Harold, and Robert “Bob”; and sisters, Lillian, Mary, Edna, and Doris. Jean was also predeceased by a daughter, Darlene Trollope.

Jean was often found socializing with friends at Northwood and especially with her sister-in-law, the late Carol Galbraith. During the nice weather, Mom could always be found outside on her daily walks. She enjoyed playing bingo and watching Coronation Street.

Mom was a good sport as she was frequently the brunt of many practical jokes. Although she seemed annoyed, deep down she loved the pranks and she always had a witty comeback. Mom also enjoyed phone calls from her children and grandchildren. It was always something she looked forward to. Music was always a big part of her life and in her younger days, she loved dancing. As it became harder in her older years to do so, you could always see her foot tapping to the music. Up until recently, Mom was an avid reader and you could always find her nose buried in a book.

She will be sorely missed by her children, Debi (Michel), their children, Natasha, and Justin (Megan); Robert, his sons Max and Alex; Heather (Phil), their children, Rhiannon (Josh) and Ryan; son-in-law, Kevin, his children Brittany, Brent, and Haley; great-grandchildren, Rowan, Ava, Sophie, Parker, Scarlet, Cooper, and Charlie; and by many nieces and nephews.

Cremation has taken place, and as per Mom’s wishes, there will be no service. A private family internment will take place at a later date. Memorial donations may be made to the Diabetes Canada, or a charity of your choice. Arrangements have been entrusted to Serenity Funeral Home, 34 Coldbrook Village Park Dr., Coldbrook, NS, B4R 1B9 (902-679-2822).