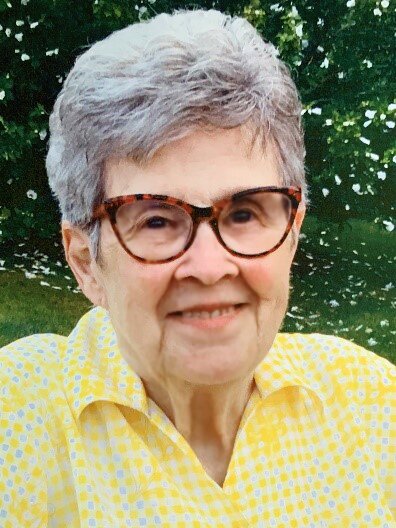 Betty Joan (Banks) Bezanson, age 91, passed away at Valley Regional Hospital in Kentville on April 13, 2022. Born on August 18, 1930, to Hedley Rupert and Birdie (Gillis) Banks in Waterville. After attending Waterville School and Kings County Academy, Joan enrolled at the Mack Business College in Kentville. Joan worked with her mother, Birdie, in Robinson’s Speciality Shop also in Kentville. She married Frank Oliver Bezanson in May of 1950. They lived in Berwick on Maple Ave for most their 70 years of marriage.

She enjoyed travelling with Frank in their camper trailer. They travelled from one end of North America to the other visiting family and seeing the vast sights. In the early years of marriage, they travelled to many baker’s conventions as representatives of the Berwick Bakery. In 1972, she travelled to England and Scotland with Frank, her two eldest, Ric and Sue, and a close family friend, John Hiltz. Frank and Joan spent winters in Florida later in life.

Joan was a talented seamstress and knitter. When clothing her four children was no longer a necessity, she took up many other crafts. There is evidence of her tole painting and cross stitch skills in many of her children’s and grandchildren’s homes. Ultimately, the family favorites were her handknit socks which she knit up until a couple months before her death. Joan was an excellent cook and baker. She loved to try her hand at meals from other cultures. She could make anything from date squares and chocolate cookies to bread and rolls to turkey dinners or what ever recipe she could find in a magazine and later, what Frank found for her on the internet.

Joan was an avid curler and a member of the Berwick Curling Club. She was a Lionette in the Berwick Lions Club, serving as Head Lionette; for many years she worked in the kitchen at the various functions put on by the Berwick Lions Club. There were often stacks of Tupperware containers filled with squares that were not to be touched by her family because, “They were for the Lions Hall.” She was a strong supporter of Berwick Gala Days and most years could be seen on a float acting “the fool” with her equally foolish friends. Her children became very good at making Kleenex flowers in various colors.

Joan loved music. She had a beautiful singing voice, and she played the piano and ukulele. She would travel far and wide with Frank for a dance that played music “… you could dance to.” Her favorite song has always been Sentimental Journey.

Joan was predeceased by her husband, Frank; an infant daughter; and her brothers, Donald and Rupert.

She will be forever missed by her family; we will miss her warm socks and her chocolate chip cookies and of course, her painted rocks.

There will be no funeral service held with respect to Joan’s wishes and the current COVID situation. Our mother was a very proud Waterville girl. One of her favorite pass-times was to follow the Waterville Village Memories Facebook page. Donations in our mother’s name may be made to the upkeep of the Waterville Veteran’s Monument; you will find her father’s name on the monument. Cheque can be made out to the Waterville and District Fire Department; note Veteran’s Monument on the cheque. Cheques can be sent to the Village Commissioner @ 5023 highway 1, Waterville, NS B0P 1V0. Include a return address for a tax receipt.