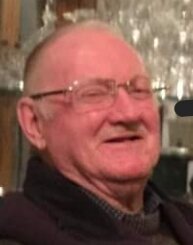 Please share a memory of Wayne to include in a keepsake book for family and friends.
View Tribute Book

Wayne Alexander Carey, 78 of New Minas, passed away peacefully on June 16, 2022 in the Digby General Hospital. Born in Harbourville, he was the son of the late Clara Violet (Loomer) Doherty of Black Rock and Earl Carey of Falmouth.

Wayne was a member of the Kentville Legion, where he enjoyed volunteering in the Poppy Program every November. He also enjoyed attending the music sessions regularly as a Legion member. Wayne had a funny side to him and would tell stories of growing up. He loved to let anyone who listened to him of how he and his brother, Donald, was always in competition. Even when having his monument ordered he felt it needed to match Donald’s so at least in death they were at an even score.

He was an avid truck driver for most of his life. Being a long-haul trucker, Wayne had many stories of his travels throughout the Maritimes and beyond. With his travels and enjoyment of attending Bluegrass/Country Music festival and any of the local music jams, he was able to create a library of stories to share. He was such a social butterfly.

Wayne was not a man you could easily forget, and if you were fortunate enough to meet him, you will always remember your interaction with him. He was such a social butterfly.

“Dad, make sure to tell uncle Donald that you got to stay here with us longer than him, but uncle Donald will undoubtedly tell you, he got there first.”

As per Wayne’s request, there will be no visitation. A private family Graveside Service and public open jam session will take place at a later date. Memorial donations may be made to the Valley Search and Rescue or the local SPCA. Arrangements have been entrusted to Serenity Funeral Home, 34 Coldbrook Village Park Dr., Coldbrook, NS, B4R 1B9 (902-679-2822).

Share Your Memory of
Wayne
Upload Your Memory View All Memories
Be the first to upload a memory!
Share A Memory