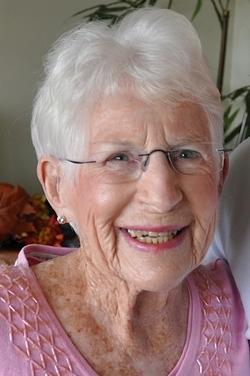 Smith, Evelyn Baker (nee Richmond) (May), 96, died peacefully at Valley Regional Hospital on March 5, 2014, of a stroke and complications of cancer. Born May 24, 1917, in Sydney, NS, she was the cherished only child of the late Dr. Gordon Baxter Richmond and Edith Florence (Butcher) Richmond of Sydney & Wolfville. Raised in Sydney, she made many life-long friends and remained a classic Cape Bretoner, welcoming & supporting wherever she went. After graduating from Sydney Academy, she attained a Fine Arts Diploma in 1937 from Mt. Allison, where she was awarded the Stanley Royal Portraiture Prize. Thereafter, she painted her world a rainbow of colour. Ev inherited her fathers passion for travel & adventure. At 6 months, she survived the 1917 Halifax Explosion; at 22 she shared an audience with the King of England. Whether cruising the dirt roads of her beloved Cabot Trial, cycling from Sydney to Halifax with friends, discovering Canadas coast-to-coast beauty with family, testing the intrigue of Western Europe on the brink of WWII, or teaching her children the intricacies and treasures close to home, she was a life-long learner & teacher. She welcomed the beauty of each day and each season, but none more so than when sharing them with family & friends at the beach - Mira River, The Margaree, Evangeline, Amherst Shore, Florida, Northport and Hirtles were part of her fabric. She was married July 4, 1941, to Lt. David May, an RMC grad from Saskatchewan affiliated with the British RAF during WWII, who was killed in action later that year in North Africa. During WWII, Ev served passionately with The Canadian Red Cross at Merchant Marine Hospital in Sydney, with The YMCA War Services in Sydney (41-42) & London, England (45-46), and with The Womens Eastern Command Headquarters in Halifax (43-44). On April 5, 1947, she married Gerald (Gerry) Nelson Smith, banker and beloved partner for 53 years until his death on February 17, 2000. Ev brought her genuine warmth & friendliness to each of their banking assignments (Sydney, Antigonish, Halifax and Yarmouth), to a long, happy retirement with Gerry in Wolfville, and to life as a widow at Orchard View (Berwick) & Hilltop Haven (Coldbrook). Evelyn cherished her heritage. Through story & example she engendered an appreciation of family, ancestry and fine craftsmanship. Her family was the collective apple of her eye, and she cheered them on in their many and varied endeavours. An avid sports fan, she was wont to say with tongue in cheek, Im not sure they can win without me! She augmented her many home-making talents with generous community volunteerism, including Halifaxs Brunswick Street Mission, Sunday school teaching, EKMs Hospital Auxiliary, and the United Church Women (lifetime member after 35 years of service). Her garden was planted for all to enjoy, her bridge games to bring friends & newcomers together, her parties to celebrate camaraderie. Latterly, her daily walking, newspaper reading and frequent hugs fuelled life itself. In addition to her husband, she was pre-deceased by infant grandson Timothy Daniel Trueman. She is survived and adored by children: Diane Lynn Bonnie (Bill) Campbell, Springhill; Dr. Gillian Jill Margot (Hazen) Trueman, Berwick; Eric Richmond Smith (Margaret Ann Willan), Moncton; grandchildren: Christopher (Sara) Campbell, Catherine "Cate" (Leon) de Vreede, David Trueman, Harrison Smith; great-grandchildren: Landon & Brady Campbell, Dylan de Vreede.| Funeral arrangements have been entrusted to Serenity Lindsay Annapolis Valley, Berwick. Cremation has taken place. Visitation: Friday, March 21, 4-6 pm at Serenity, 192 Commercial St, Berwick; funeral service: Saturday, March 22, 11am, Christ (Anglican) Church, 238 Commercial St, Berwick; luncheon reception and Evie Party to follow at the church hall. We ask that you wear colour! Family flowers only. Donations may be made to: The Valley Hospice Foundation, 23 Earnscliffe Avenue, Wolfville, NS (B4P 1X4); info@valleyhospice.ca or to the charity of your choice.On-line condolences may be made by visiting www.serenitylindsayfuneralhome.ca.