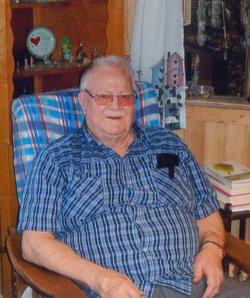 DOTTEN, Ervan Leonard Len It is with great sadness that we announce the passing of Len Dotten, 82 of Cambridge, Kings County on June 28, 2015 at the Valley Regional Hospital, Kentville. Len was an Aero-Engine Technician in the R.C.A.F. for 23 years. After retirement, he became well known throughout the valley as a top notch mechanic. He was a member of the Royal Canadian Legion for 48 years. He volunteered for the Red Cross for many years and was always ready to lend a helping hand to anyone in need. Len enjoyed racing stock cars, curling, fishing, darts, and spending summers at the lake, and he was always ready for a game of cards. He is survived by his wife and best friend Jean, his children James, Sydney, NS; Dale (Connie) Sardis, BC; Carol (Harry) Misner, Kentville, NS; Bertha (Bruce) May, Ottawa, ON; Barbara (Dan) Howe, Princeton, BC; step-children Donna Hirtle, Berwick, NS; Marlene Saunders, Airdrie, AB; Terry Parrish, Ottawa, ON; sisters Lyra Deal, Rockingham, NS; Sherron (Grant) Hamilton, Brickton, NS; 18 grandchildren and several great grandchildren. Len was predeceased by his parents Ervan and Ellen Dotten, brother Frank, his first wife Jean Christie; sisters Dorothy Yachyra, Shirley Gould, Elizabeth Dotten; brother-in-laws Fred Yachyra, Brenton Deal and Robert Gould. As per Lens request cremation has taken place. A memorial service will be held on Thursday, July 2, 2015 at 2:00p.m. at the Berwick Funeral Chapel, 192 Commercial Street. Pastor Darrell Dykens officiating. A private family burial will follow. Donations in Lens memory may be made to the Heart and Stroke Foundation or a charity of ones choice. The family at this time would like to extend thanks to Dr. Sinclair and the staff of Medical "A" Unit, Valley Regional Hospital for their outstanding care and compassion. Arrangements have been entrusted to Serenity Lindsay Annapolis Valley Funeral Home (Berwick Funeral Chapel) (902) 538-9900. On-line condolences may be sent by visiting www.serenitylindsayfuneralhome.ca