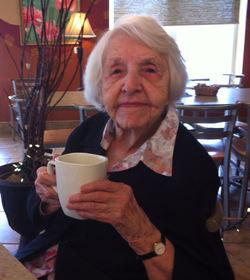 Sadie “Sally” Irene Salmon 98 - of Wolfville. We mourn the loss of a great woman on November 19, 2015–Sally was survived and loved by many, from her 5 children; Pat, Bob, Ted, Jim and Kathy (everyone a winner as she used to say); their partners Terry, Marleen, Lucy, Gail, and Michael; Her 10 grandchildren Tracy, Coby, Tessah, Chris, Josh, Nathan, Jamie, Jesse, Dylan, and Owen; and their partners Dave, Stacey, Jon, Natalie, Marsha, Margo, Hannah, Mike, and Katrina; her 7 great-grandchildren Daniel, Rowan, Theo, Azaria, Marlee, Sterling, and James; not to mention her grand-puppy Fox and beloved cat, Mokka. She has had many adopted family members over the years and thought of them as part of the gang, especially Wes, Maureen, Helen, Cheryl and Terra. She was a loyal friend to many, a devoted volunteer, valued community member and role model. She would often say she never worked and was lucky enough to just stay home and raise her kids – probably the most important work anyone has ever done, especially because she did it so well. She excelled at loving and caring about everyone. The beauty of living 98 years means you get to share a lot of love. And she was generous with her love. Sally died at home surrounded by all her family and was looking forward to going to her final resting place with the other love of her life, Harry who has been waiting for her since 1984. Reunited at last. In lieu of flowers memorial donations may be made to the MS Society. Arrangements have been entrusted to Serenity Lindsay Annapolis Valley Funeral Home & Chapels . A memorial service will be held Wednesday, November 25th, 2:00 pm Wolfville Funeral Chapel, (902-542-4656) Online condolences may be made by visiting www.serenitylindsayfuneralhome.ca
Share A Memory
Plant a Tree