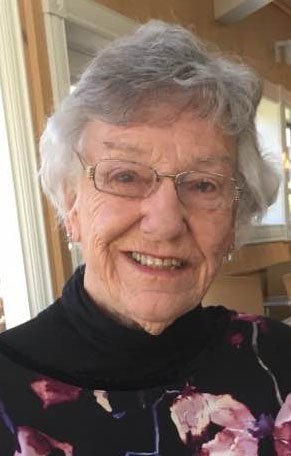 Passed away peacefully on March 30, 2018 at Blomidon Court, Greenwich, NS, age 93. Phyllis was born on March 21, 1925 in Wolfville NS, the first child of Rev. Emerson and Gertrude Curry. In her early years she lived mainly in the United States where her father was a Congregational Church pastor in several New England parishes.

Phyllis graduated from Derby High School in Connecticut and went to Acadia University, Wolfville, NS. There she met the love of her life, Donald MacPherson. She worked as a secretary at Acadia University and for Hon. George Nowlan at his law office.

In 1948 she married Don and enjoyed 58 wonderful years of marriage before Don passed away in March 2007. Don’s teaching and school administration career took the family to Yarmouth, Brookfield, New Germany, Lunenburg, Bridgewater, and Wolfville. In several of these communities Phyllis was active in her church, especially in the choir and as a charter member of the United Church Women. In Lunenburg she cofounded (with Jo Eisenhauer) the Sea Rangers girls’ youth group.

The core of Phyllis’ life was her love of Don and her devotion to her children. She instilled in all her children a passion for education as the path to success and happiness.

At Phyllis’ request, there will be no funeral service. She will rest together with Don in the Willowbank Cemetery, Wolfville. A private family memorial will be held at a later date.

Donations in memory of Phyllis may be made to the Don MacPherson History Prize, Park View Education Centre (Bridgewater), South Shore Regional School Board, 69 Wentzell Drive, Bridgewater, NS, B4V 0A2.

Messages of condolence may be sent to Serenity Funeral Home, 34 Coldbrook Village Park Drive, Coldbrook, NS, B4R 1B9 or online to www.serenityfuneralhome.ca.