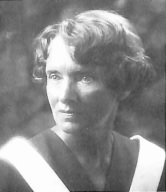 Jeanette was born in 1924, a daughter of the late Nicholas and Belle Powell of Victoria Carbonear, Newfoundland.

Along came WWII, and in 1944, she fell in love with a handsome Canadian sailor, Albert Edward Gardner of Halifax, Nova Scotia.  A year later, on June 19, 1945; they were married in Halifax and thus began their lively and loving relationship for 55 years.

Jeanette lived as any true Newfoundlander does, always striving for her and Albert to get ahead and make a success of their lives.  For example, she delighted in roughing it as a Boy Scout leader and received her Wood Badge in 1958.  Determined not to be outdone, she always wanted to be considered an “Educated Woman” and began attending university in the 1970’s and graduated in 1978 with her BA in English from Mount St. Vincent University in Halifax.

As she would say, “after the boys were out of the nest”, Albert and Jeanette built a retirement home in New Minas, NS, golfing all summer, and wintering in Florida and Victoria, BC, only putting down the clubs at the age of 85.

Lastly, it can be said that her church was the other pillar of her life.  She was a devoted member of the United Church of Canada from the day she was married in Halifax in 1945, until her death.

A private committal service will be held in the Willowbank Cemetery, Wolfville. In lieu of flowers, memorial donations may be made to the Heart & Stroke Foundation of Canada or to the Orchard Valley Unnited Church, New Minas.   Arrangements have been entrusted to Serenity Funeral Home, 34 Coldbrook Village Park Dr., Coldbrook, NS, B4P 1B9 (902-679-2822).

Share Your Memory of
Jeanette
Upload Your Memory View All Memories
Be the first to upload a memory!
Share A Memory
Plant a Tree