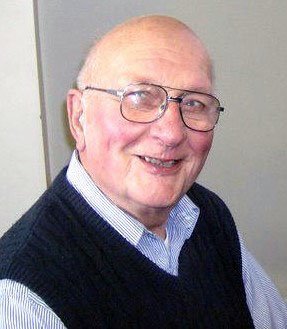 Raymond Charles Dahn, age 93. It is with sorrow that the family of Raymond Dahn announces his death after a short illness.  Raymond was born in Passaic, New Jersey, USA on April 6, 1926, son of Raymond and Marcelle (Marignac) Dahn.

Raymond was a veteran of WW2 having served in a Tank Destroyer battalion of the US Army.  He graduated as a Mechanical Engineer from Stevens Institute of Technology.  Raymond married his lifelong love, Margery, on June 30, 1950.  Raymond’s career involved varied engineering and administrative assignments in industries throughout northeastern USA and, before immigrating to Canada, as Business Manager of Friends World College, Long Island, New York.  The family arrived in Centre, Nova Scotia in 1970 and has not moved an inch since.  Raymond worked at ABCO Plastics and was a small business owner.  He was a member of the Lunenburg Curling Club and a VON volunteer.

He was predeceased by his wife of 66 years, Margery Huber Dahn.

The family wishes to thank the nurses and medical staff at South Shore Regional Hospital for the exceptional care they gave Ray during his illness.

A Memorial Service to celebrate Ray’s life will be held at a later date. Memorial donations may be made, in Ray’s memory, to the Nova Scotia Nature Trust.   Arrangements have been entrusted to Serenity Funeral Home, 34 Coldbrook Village Park Dr., Coldbrook, NS, B4P 1B9 (902-679-2822).

Share Your Memory of
Raymond
Upload Your Memory View All Memories
Be the first to upload a memory!
Share A Memory
Plant a Tree