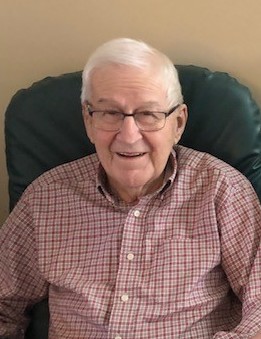 Robert Jean “Bobbie/Bob” Robichaud, passed away peacefully at the Villa Acadienne, Meteghan, on May 7, 2021. Born in Meteghan, on March 8, 1934, he was the 13th child (youngest) of the late Basile and Emilie (Gaudet) Robichaud.

Sit back and relax, and through laughter and tears, please join us in celebrating Bob’s 87 years on this earth, a life well lived.

At 17 years old, Bob and his older brother Francis travelled to Montreal with their rustic toolboxes in hand to find employment, and they stayed with an older sister Thérèse and her husband Gérard. While working for CN, he received train passes which he used to visit Marilyn in Boston. The stars must have aligned…because after a 23-date courtship with Marilyn, they were married.

Like many men from this generation, Bob showed his love for his family by being a great provider and leading by example through his impeccable work ethics. He adored music, and he shared this love by teaching his three children how to play the guitar.  We have many wonderful memories of kitchen parties with Bob playing his guitar!

Measure twice, cut once! This was indeed one of Bob’s favorite sayings. His construction projects, and there were many, were precisely executed. I’m wondering if he’s going to look at those Pearly Gates and ask St Peter if they need repairs!

He was a man of self-discipline, focus and ambition. Bob and Marilyn resided in Montreal for 13 years, raising their family, while he worked for CN and later for Shell. His goal was to move back to his quiet hometown of Meteghan on the Baie Ste-Marie, and in 1967, he realized that dream. He became a co-owner of Meteghan Funeral Home, where he worked as a Funeral Director for 25 years. He also served several consecutive terms as a Clare Municipal Councilor, and was one of the founding members for the construction of the current Villa Acadienne.

Bob had the perfect persona for the Funeral Director position. Donning a classy three-piece suit, speaking in hushed undertones at funeral events, he exuded a professional composure. At social events, he easily could have been mistaken for James Bond, with cocktail in hand, slicked back hair, and his debonair poise! Even his sense of humour was as dry as a British comedy. And chances are, if you knew Bob and you bumped into him after an absence of 30 years, he still looked the same.

Bob retired in March 1991, and enjoyed many hobbies over his lifetime, but his most passionate ones were deer and rabbit hunting. We think that he enjoyed sharing his stories as much as being in the woods with friends and family. He would not give up before he shot his rabbit! One of his brothers-in-law, Paul Clark, was often heard saying, “Let Bob shoot his da**ed rabbit so we can all go home.”

In the spring and summer months, Bob and Marilyn also enjoyed gardening and tapping over 100 sugar maple trees for maple syrup production. During the winter months, snowmobiling and curling were two more of Bob’s favorite activities.

Most of Marilyn’s family resides in Maine, and Bob was especially fond of travelling there with his family. In fact, he loved it so much that he chose it as his final resting place. Great decision, Bob, because Maine is truly a beautiful place to spend eternity!

Bob was predeceased by a son Daniel (Denise’s twin brother), and eleven siblings.

The family wishes to express a very special thank you to the compassionate and devoted staff of Salon Rita of the Villa Acadienne, and to Dr. Chandler and Dr. Blinn for their excellent care and support.

Bob leaves his loving wife of 67 years and his three wonderful children behind. Our journey on this earth is always measured in years; however, it really should be measured by the amazing memories we made with Bob while he was amongst us. Because in every one of his children, his grandchildren and great-grandchildren, a little piece of Bob lives on. This is truly Bob’s legacy, to be remembered, to be loved and cherished…now and forever. Measure twice, cut once. May you Rest in Peace, Dad. ♥