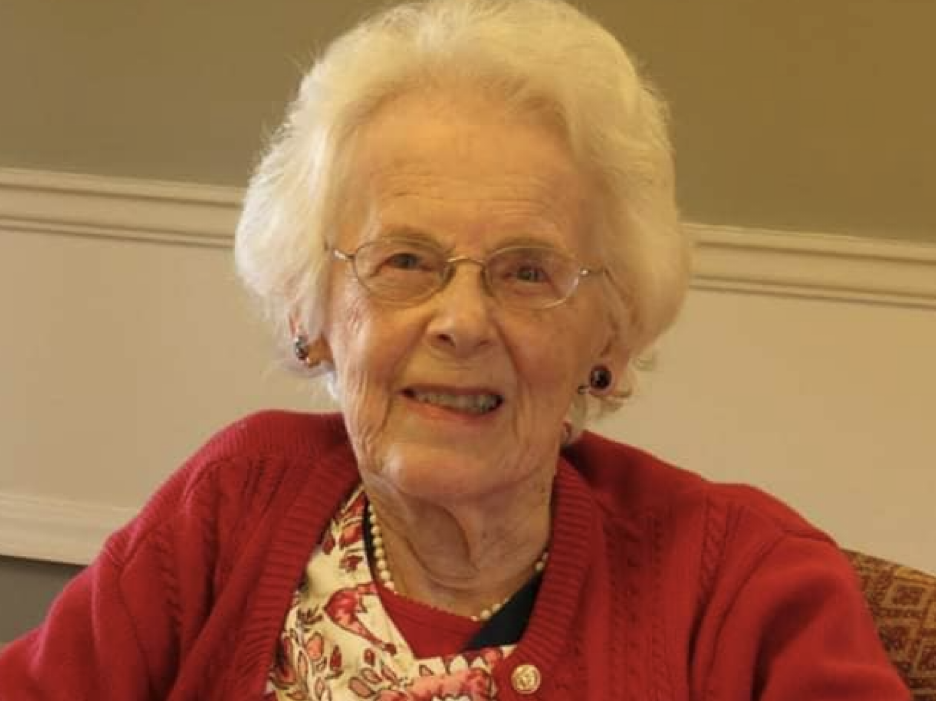 Please share a memory of Elizabeth to include in a keepsake book for family and friends.
View Tribute Book

The family of Elizabeth Robbins (Haley) Shreve, of Wolfville, is sad to report her death at the Shannex Orchard Court nursing home in Kentville at the age of 104. Elizabeth was bright and cheery right up to the end when a stroke took her from us. She was born in St. Stephen, NB, on December 12, 1917, and grew up there attending local schools and the Baptist Church.

She attended Acadia University, graduating with a Bachelor of Science in Household Economics in 1939. Elizabeth completed a dietetic internship at Montreal’s Royal Victoria hospital before marrying Robert Shreve in 1940. While Robert served in the Canadian military, the young couple travelled across Canada to several different postings during the war. After the war, they settled in St. Stephen where Elizabeth raised their three children and was a receptionist for Bob’s insurance business that operated out of their home. They retired from the insurance business in 1987 and moved to Wolfville to be closer to family.

One highlight of her life was a trip to California in 1937 where she visited her Aunt Mary for a couple of months and attended the filming of some Hollywood movies. She made the return trip alone by rail - a big event for a young lady in the 1930’s! Elizabeth loved gardening - always keeping her flower beds looking great. She was also a great cook. Her grandkids remember especially her corn chowder and her lemon snow dessert.

She was predeceased by her parents, Harold and Alice Haley of St. Stephen; her husband, Robert; and her brother, Frank Haley of St. Andrews.

Cremation has taken place. Plans for a memorial service have not been finalized. Burial will take place in Saint John, NB, at a later date. Any donations may be made in memory to the Harold Haley Memorial Bursary at Acadia University, Wolfville, or to The Canadian Foodgrains Bank in Winnipeg, MB, a charity Elizabeth supported. Arrangements have been entrusted to Serenity Funeral Home, 34 Coldbrook Village Park Dr., Coldbrook, NS, B4R 1B9 (902-679-2822).

Share Your Memory of
Elizabeth
Upload Your Memory View All Memories
Be the first to upload a memory!
Share A Memory