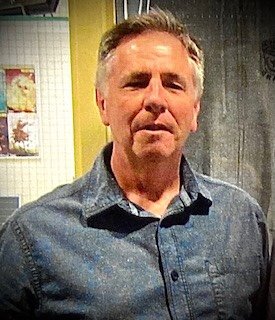 ‘And in the cold of the winter time

Our love is true and oh how it shines.

A new day is just around the bend,

when the sun comes up

it will be spring time once again.’

~ I Believe by David and Jeremy Llewellyn

David Armand Llewellyn peacefully passed away at home on February 2, 2021, with his wife of 45 years, Coleen, by his side. Born April 27, 1952 at home in New Albany, to Colleen and Armand Llewellyn.

David was a longstanding member of the Nictaux Baptist Church.  He was a part of the Youth Group program, member of the musical drama group, The Messengers, the Praise and Worship Team and the Trustees Board.

David drove school bus in Annapolis County for 30 plus years. He enjoyed talking with the kids, hearing about their day and sharing a song on their bus ride together. In his last couple years, he changed bus routes giving him the opportunity to see his grandchildren waiting at the bus stop. He was a welder by trade, a cabinet builder by day and a musician by night. Whether it was masonry, drywall work, changing brake pads and timing belts, he could do it all he was a jack-of-all-trades.  In 1984, David built his family home and in later years renovated his and Coleen’s home for their retirement days.

David had a passion for music, with a well-rounded album collection and memorizing the latest songs on the radio. He had the amazing ability to teach himself to play any instrument including the flute, saxophone, harmonica and guitar.  He loved to write songs and perform.  David was in numerous bands: Buster, Rhapsody, Tempest, Jumpin Jack Flash, The Dave Llewellyn Band, Cousin Mary, Kairos, and many others developing lifetime friends and a large extended family.

In his free time David enjoyed watching the Toronto Blue Jays, fishing, camping, playing catch in the backyard, day trips exploring the province and cheering on his grandchildren in their activities.  Somehow, he would always find a friend to chat with, no matter where he went.

David was predeceased by his father Armand Llewellyn and step-father Douglas Pinch.

A private family funeral will be held in David’s honour on Saturday, February 13, 2021 at 2:00 pm at the Nictaux Baptist Church, officiated by Rev. Jeff Milne and Rev. Bill McLeod. The funeral service will be live-streamed and may be viewed at this link, https://www.facebook.com/nictaux.baptistchurch.  Donations in memory of David may be made to the charity of your choice.  Arrangements have been entrusted to Serenity Funeral Home, Digby County Funeral Chapel, 367 Highway #303, Digby, B0V 1A0 (902-245-2444).