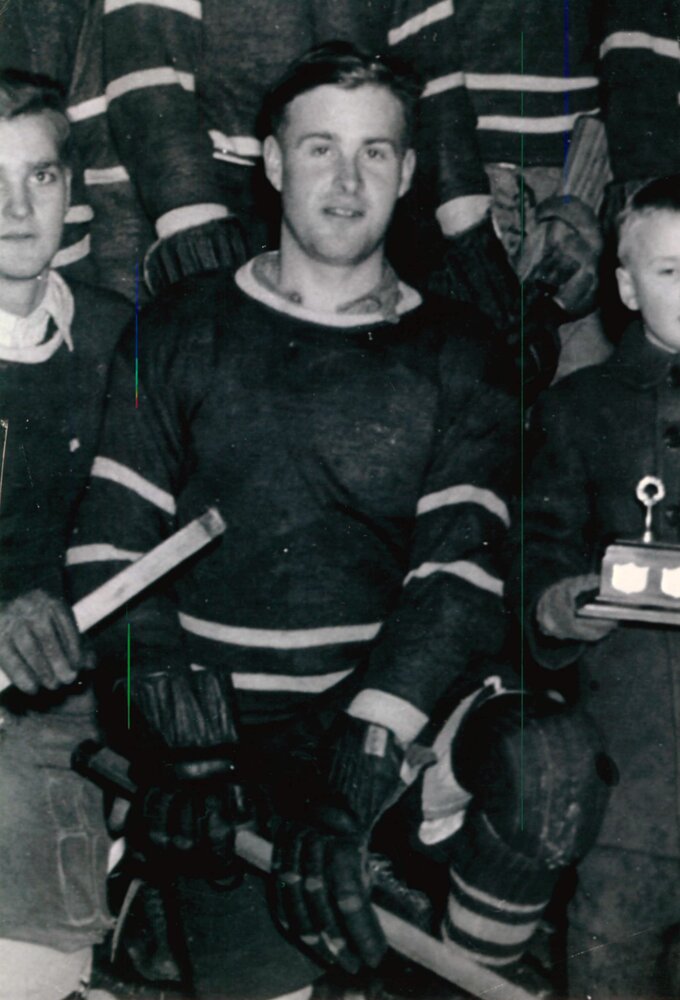 John William Regan, 94, of Port Williams, passed away in the early morning hours of October 2, 2021, at home.  Just a few, short hours later, a magnificent rainbow appeared as though to embrace his farm, radiating from one end of the land to the other.  Born in Port Williams on September 18, 1927, at the former Woods Maternity Hospital, he lived his entire life, and was to become the oldest resident, in and of Port Williams.  He was the third child to Ralph and Jessie (Garland) Regan, a brother to Mark Andrew Garland and Laura Frances.

A life of very hard work was ingrained in Dad, from the time he was five years old, when he was sent out to bring the cows in from pasture during a thunder and lightning storm.  This no doubt explained why, as a young child, during storms, he could be found hiding under the kitchen table with his dog at his side.

When WWII broke out, Dad was not of age to enlist, and instead, contributed by knitting scarves alongside his mother for the soldiers.  At the age of 11, he went to work on Henry Cogswells farm and by the age of 13, was taken out of school to work full-time on the family farm to help pay the mortgage.  He continued to look after the farm until a stroke held him back.  He and his father grew a lot of potatoes and he recalled one fall, carrying up from the cellar, 150 barrels of potatoes, each weighing 75lbs, then loading them onto a waiting truck.  He spoke with very fond memories of life on the farm, of his dogs, and of the cows, chickens, geese, and the work horses, who ploughed the fields almost as though there was no work to it at all.

While he was never to receive a formal education, he was very well read, a whiz at math, and was up-to-date on current affairs, not only locally but far beyond.  There was no subject brought up that Dad didn’t know of.  Years later, he went on to work for Perry L Millett & Sons in New Minas, as a heavy equipment operator, primarily as a bulldozer operator.  His years of bulldozing led him to countless hours of reinforcing the Grand-Pré dykes, where he unearthed numerous remnants and artifacts of French Acadian settlements, and to where he believed he found the original road to Grand-Pré.  During excavations in Port Williams, he also found seven French Acadian homesteads and, near his childhood home, discovered a foundation of 3’ board walls inside the foundation of a 9’ well.  Built within the walls of the well, 2’ down, was a pine log which was probably used to stand upon to retrieve the water.  He also knew of two millponds, a brick plant, and of three burial grounds: one of which was for indigenous families, and one of which was for those who had perished of scarlet fever were laid to rest, all located within Port Williams.  Sadly, a wealth of knowledge and history of the Port is now gone.

Dad was an avid sports fan and continued until just recently, to watch hockey on TV.  As a younger man, he loved playing baseball and hockey, and his love of hockey brought him to play for the Port Williams hockey team starting out in nets.  He went on to play defense in the Valley Senior Hockey League for the Wolfville Red Wings and later, the Wolfville Falcons, winning the league title in the 1949-50 season.  He was fearless on the ice, and while he never started a fight, he would tell us he would never back away from one either!  When it was suggested, he was probably a very good player in his sports he would say, “well, there were lots better at it”, but did say “one thing I did do, I gave everything I had!”

It was how he was to live his life.  Dad always placed others before himself, always willing to lend a helping hand, and forever provided fruits and vegetables to family and friends alike.  He was one of the first firefighters with the PWVFD, battling many fires over the years and loved working in the canteen at the Saturday Night Square Dances, and was quick to volunteer his time at the annual ox-pull, held in the Port for many, many years.

He loved to laugh, and had many stories to share, loved music, and loved to sing, he would often compose his own songs.  Sunday morning awakenings were to be to hear him singing and whistling from the kitchen as he made breakfast.  He loved Christmas, and he and Mom would take us out in the woods looking for our tree.  After trudging through the snow, he not only had to carry out the tree, but carried the four of his children as well!

Mom first came to Nova Scotia in 1946, and Dad noticed her walking in Kentville, and again, on another day, saw her at Rands’ General Store by the “old bridge” in Port Williams.  He was “mesmerized”.  As it turned out, Mom was working with his then sister-in-law, Violet, and it was arranged for them to meet over a game of cards.  They were married on November 30, 1951, and set about settling in their apartment, and from then on, worked together in raising their family.  At the time they got married, Dad had a collie named Dick, who stayed on the farm; because dogs were not permitted in the apartment house, Dick would often walk down to the apartment to visit, then return to the farm.

“As infants crying in the night, Dad would get up out of bed, change us, then bring us to Mom for our feeding, and once our bellies were full, would return us to our beds.  When one of us were sick, Dad immediately, upon coming home from work, and without saying a word to anyone, would go to who was sick.”

He loved life and all that came with it without complaint, and he loved his family to infinity.  Just a couple of weeks ago, Dad asked, “Where is your mother”, to which Mom replied, “I’m right here John”, his reply, “I just want to always be with you”.  He must have been so tired carrying out a full-time job, working from sunrise to sunset, cutting wood, and picking apples on the weekends, with gardens to tend, and yet had time for his family.  Mom would tell us, “he did everything he could and all that he could for us”, and we knew it to be true.

Besides his parents, Dad was predeceased by his brother Garland (the late Frances), his sister Laura (the late Thornton) Schofield, and by several life long friends he grew up with, worked along with, and played in sports: from the Jess, McDow and Newcombe families, and by long-time friend and co-worker, Dale Forsythe.  How he missed them all.

A private family visitation and service, officiated by Rev. Fran Woodside, will take place on Thursday, October 7, 2021, followed by an interment in the St John's Anglican Cemetery, Port Williams.  Memorial donations, in Dads memory, may be made to the Nova Scotia Heart and Stroke Foundation.  Arrangements have been entrusted to Serenity Funeral Home, 34 Coldbrook Village Park Dr., Coldbrook, NS, B4R 1B9 (902-679-2822).

“Dad: You were our hero and will forever be.  May you forever rest in the arms of an angel.

“To our brother, Buzz, you went above and beyond, selfless, never faltering in your caring of Dad, and saw it all the way through to have Dad remain at home.  There are truly no words great enough to express our thanks to you. ~ Love Karla, Valda, and Boudy”